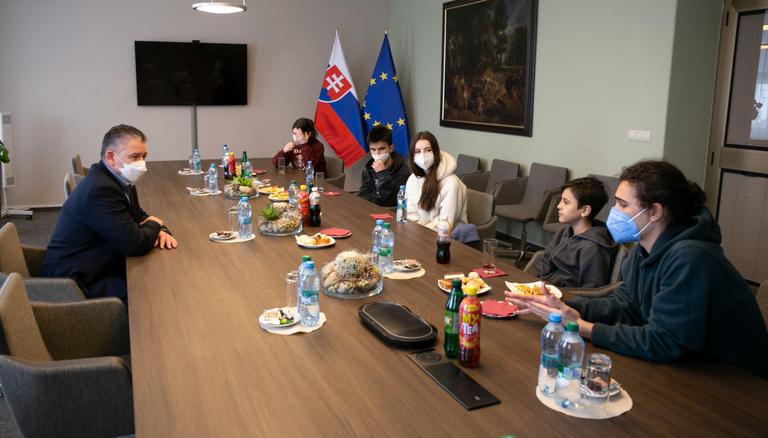 An 11-year-old Ukrainian boy, Hassan, who travelled for nearly 960 kilometres along with some strangers, has finally reached Slovakia on Thursday, March 10. News of the fearless boy, who left southeastern Ukraine with a plastic bag, passport, and telephone number scribbled on his hand, earlier made international headlines for his courageous step to travel alone to the Slovakian border. After reuniting with his siblings in Slovakia, he expressed happiness but also showed grave concern for his widow mother, who was left alone in Ukraine.

According to a report by UK English Daily, Metro, his mother, Júlia Pisecká, has to stay in Zaporizhzhia– a city near a nuclear power plant that suffered a major Russian attack last week. Pisecká told the media outlet that she was not able to travel with her son as she has to take care of her elderly and immobile mother, who is unable to flee despite Russia’s aggressive approach towards her hometown. She said that she left her on a train heading for the border in the hope “he would be taken in by kind-hearted strangers”. When she knew that her son has reached home safely, the Metro reported that she expressed extreme happiness without caring about her current situation in Ukraine.

Please save our Ukrainian children and give them a safe haven, pleads his mom

“‘There’s a nuclear power plant next to my town, which the Russians were shooting at. It was on fire. I can’t leave my mother, she can’t move independently, so I sent my son alone on a train toward the Slovak border,” The Metro quoted the lucky mother as saying. “There, he met people with a big heart. A small country has people with big hearts. Please save our Ukrainian children and give them a safe haven,” she added. On the other hand, Hassan, who was now enjoying himself with his siblings, was first gained international attention after Roman Mikulec, Interior Minister of Slovakia, shared his story with some photographs on Facebook on March 7. The story soon went viral on other social media platforms as well.

“A heart touching story in entire Slovakia Little Hassan is only 11 years old, but in his way, he has shown huge determination, courage and fearlessness that sometimes adults don’t have. I am really very sorry for him and all the other children and their families who have to flee their country because of what is happening in Ukraine,” the minister wrote on Facebook. “Together with his siblings, he already asked for temporary protection. I assure all those who flee from Ukraine before the war conflict, that here in Slovakia we are ready to help,” he added. Meanwhile, while speaking to Metro, Hassan said he doesn’t care about the future but added he wanted to enjoy the entire day with his siblings who were eagerly and anxiously waiting for him since his story went viral.