We recently surveyed sellers about the ways online marketplaces attract new buyers. In the soon-to-be-published data, something jumped out at us: references to Amazon delivery vans as a marketing vehicle.

We didn’t ask sellers specifically about Amazon trucks. The survey asked them to rank paid search, affiliate marketing, email marketing, social media marketing, and TV/radio commercials on their effectiveness in attracting buyers, along with some other questions.

The following is a sneak-peek of excerpts respondents left in the comments field:

“Amazon delivery vans advertise via their logo painted on truck as they are out driving around.”

“Amazon with its logo boxes and trucks probably does the best. It’s instant recognition.”

“Amazon stays in the news and has its branded trucks everywhere.”

Sellers pointed out that Amazon’s fleet of trucks on the highway and vans in cities and suburban neighborhoods are effective at getting attention.

That isn’t lost on Amazon – it launched a marketing campaign in March that’s plastered on the sides of its delivery vans. Instead of the blue smiley-arrow pointing at the word “prime” on the side of Amazon delivery vans, they now sport the following verbiage:

You can check out images on Sign Pro’s Facebook page, which indicates the campaign launched in March.Here’s what those Amazon vans used to look like (image taken from Amazon’s press page): 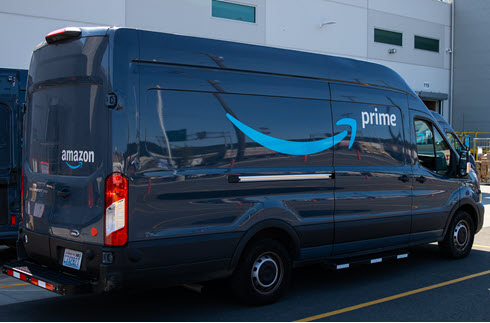 As you can see from the images on the Facebook page, blue is out, orange is back in.