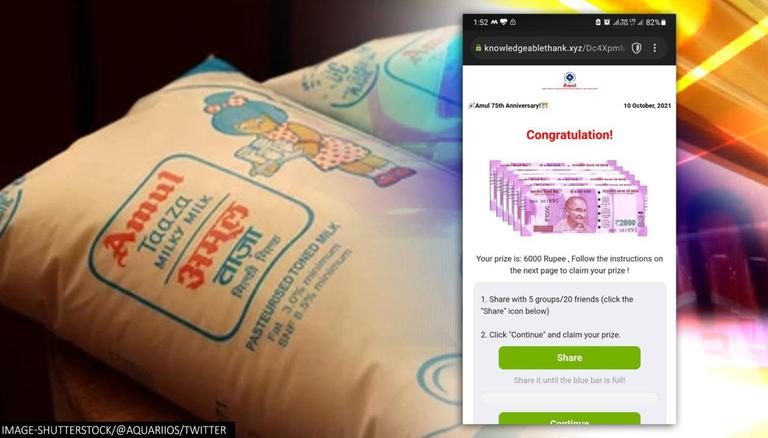 Misinformation has created havoc on social media platforms amid the pandemic. Scammers are spamming people by sharing forwarded links on WhatsApp, Facebook and Twitter. Recently, a forward is going viral on WhatsApp which claims to provide a Rs 6,000 reward on completing a survey. The miscreants are using Amul’s 75th-anniversary celebration to share the spammy link.

The link with the ‘Amul 75th Anniversary’ title tells users to “Click to enter to participate in the survey, have a chance to win 6000 Rupees’. On clicking the link, it takes the user to a page that says you have won Rs 6000 and asks them to follow a set of instructions to claim the prize.

It asks users to shares the link with five groups or 20 friends using a ‘Share’ icon and press on ‘Continue’. “Share it until the blue bar is full,” it says.

“A link is circulating on social media about your 75th Anniversary and Rs 6000/- prize. Is that true?? If fake please make people aware about it,” a user said on Twitter. Another said, “Hello Amul Team, what is this heck? Are you guys making fool people lure him earn 6000 INR for free. For more details, check the snapshot, please clarify.”

A link is circulating on social media about your 75th Anniversary and Rs 6000/- prize. Is that true?? If fake please make people aware about it.

However, it is important for netizens to know that the link is fake and no such survey has been launched by Amul.

It is advised to users to not click on such links as it can contain possible malware that can steal your personal and bank data. On receiving such spam links, one can report it to WhatsApp as a scam or block the number if it comes from an unknown number. Hence, the forward going viral is fake.

Earlier this year, Amul marked its 75th anniversary. The Amul co-operative movement was started in 1946 with two villages in Gujarat collecting 250 likes of milk per day. Currently, the dairy giant handles over 29 million litres of milk on peak days. The Gujarat Cooperative Milk Marketing Federation (GCMMF), which owns Amul, had said that it posted a turnover of Rs 38,542 in the last financial year.