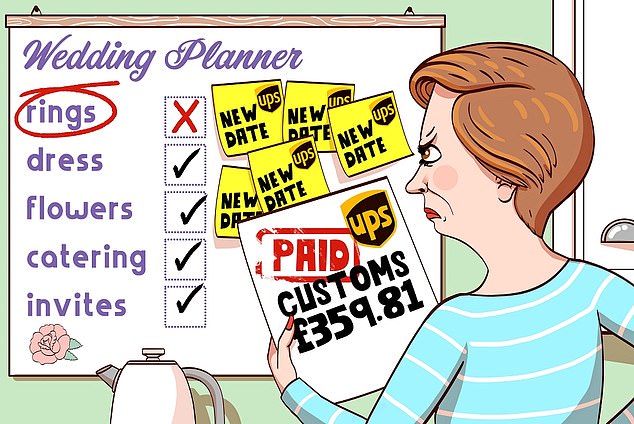 I received an email from UPS stating that import fees were due, but that ‘your driver also accepts limited payment methods in person upon delivery’.

The delivery date was changed several times, with the import fees given as the reason.

To speed up the delivery process, I paid the import fees of £359.81 online. Immediately after receiving confirmation of my payment, I received another email rescheduling the delivery yet again.

This time, it said the driver had attempted to deliver the parcel but I had refused to pay the fees on the door.

I was at home all day, and I have a motion-sensor video doorbell which did not detect any motion for the suggested attempted delivery time. Customer services then told me UPS couldn’t locate the parcel.

I have been trying ever since to get a refund of the import fees that I paid, and have been spoken to very rudely at every opportunity.

I’m now being told I left it too late to try to secure a refund, despite constant contact and false promises throughout this time.

Tony Hazell replies: Your wedding last year had to be postponed in the end, but if it had gone ahead, you would have had no rings to swap as you shared your vows.

The rings you chose cost you £1,614 and were handmade using unique stones you had selected yourselves. The sender, who is based in America, remade them for you at her own expense, but they could obviously not be identical to the ones you had chosen.

You tell me you spent weeks scrolling through auction sites to try to find the originals, suspecting they had been stolen.

When I made contact, UPS finally refunded your fees.

A spokesman tells me: ‘We take the delay or non-delivery of any package very seriously.

‘We have reviewed the circumstances of this shipment and will refund the customs charges. We regret any stress or inconvenience that has been caused.’

It may also want to take a look at the attitude of its staff, who you say were rude to you and apparently could not be bothered to try to resolve your case.

I’m out of pocket after missing Easyjet shares flight

In September, I instructed Hargreaves Lansdown to purchase my allocation of 427. As I do not use internet banking, I spoke to an operator on September 17, paying £1,750.70 by debit card.

The operator assured me that he had completed the transaction.

However, when I checked my online account on October 2, the £1,750.70 was still being shown as ‘cash available’.

When I queried this, I received a reply message saying that as I had not taken up the share rights, easyJet would dispose of them.

I received approximately £1,100 for my rights shares.

I estimate I have lost more than £600, plus the profit I could have made on the shares themselves, as I intended to sell them at around 700p.

Tony Hazell replies: Hargreaves Lansdown looked into your complaint. I know you are not happy with the outcome, but I feel its solution is fair.

As you say, your lapsed rights were sold for £1,195 — as they cost nothing, that is all profit.

Had you bought those 427 shares for the offer price of 410p and then sold them at the absolute peak on the offer day of 685p, then your profit would have been £1,174. So you are actually £21 better off.

You told me in your letter that ‘owing to my poor internet I cannot keep up with the financial markets’. This suggests that it is very unlikely you would have got the peak price.

Incidentally, easyJet shares later fell to around 486p but are now trading at around 620p, so if you had not sold then your profits would have been even less.

You also tell me that you had planned to bundle them with your existing easyJet shares and sell them all at once — and that the reason you did not do this is because you were waiting for news of your rights shares.

I understand your frustration, but I do feel that your request for £1,000 in compensation is excessive.

Hargreaves Lansdown offered you £150 compensation. I asked if it would increase this to £250, but as you had already accepted the £150 and are no longer a client, the firm said it could see no incentive to do this.

What happened to my father’s life policies?

My father died suddenly in December 2020.

He had some life policies which had gone to Phoenix. When I asked the firm about these, its reply was abrupt, saying there was no record of any policies and, as I did not have further details, I would simply have to accept that.

I have since found details of the policies, which dated from between 1968 and 1975.

The probate solicitor wrote to Phoenix about these in March.

I have phoned several times and been promised return calls, but have received no reply.

Tony Hazell replies: Phoenix has made a thorough search and confirms that all the policies were paid out over time.

I am afraid there are no additional benefits or payments to be made.

However, Phoenix has offered a £120 goodwill gesture because of your poor ‘customer journey’.

Some links in this article may be affiliate links. If you click on them we may earn a small commission. That helps us fund This Is Money, and keep it free to use. We do not write articles to promote products. We do not allow any commercial relationship to affect our editorial independence.