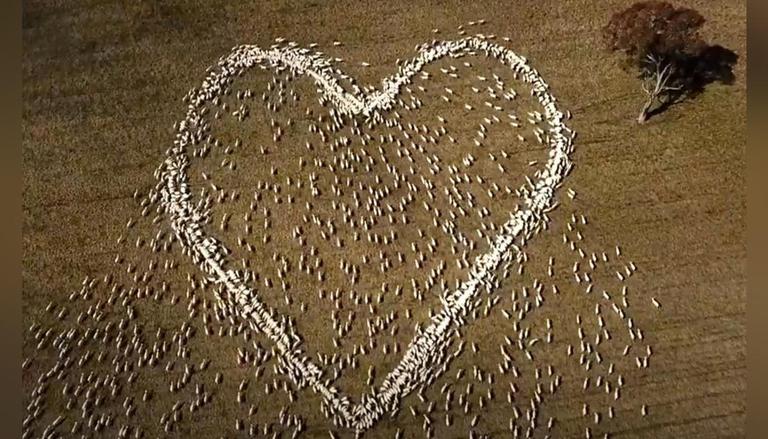 The devastating Coronavirus pandemic has shocked the world in many ways. The pandemic-induced lockdowns not only brought the world to a standstill but also drained people physically, mentally as well as emotionally. With travel and other restrictions in force, many were left to die alone as their loved ones could not attend the funerals to pay homage.

A similar incident has come to light from Australia where a farmer couldn’t go to his aunt’s funeral because of pandemic restrictions. However, he chose to pay his respects to the departed soul with a novel alternative – dozens of sheep arranged in the shape of a heart, representing his love for her. At the time of his aunt’s death, Ben Jackson was locked down at his farm in Guyra in New South Wales state, roughly 430 kilometres away from his aunt’s place.

According to a report by the Associated Press, drone-captured video of ewes munching barley in a small field while unwittingly expressing Ben Jackson’s affection for his beloved Auntie Deb was viewed by mourners at her funeral in Brisbane this week. “It took me a few goes to get it right… and the final result is what you see. That was as close to a heart as I could get it,” Jackson said to The Associated Press. According to Jackson, he thought to relieve the monotonous stress of hand-feeding livestock during the devastating drought across most of Australia that broke in the early months of the pandemic. So he started experimenting with making shapes with the flock of sheep.

Jackson would often be seen spelling names of his favourite musical bands with grain dropped from the back of a truck. He then discovered that the flock would roughly adopt the same shape for several minutes. “This certainly lifted my spirits back in the drought and also motivated me to make the shape of a love heart for my late auntie,” he said. The heart that he made for his auntie seems to have a bit of an effect across Australia, said Jackson, referring to emotional social media responses. “Maybe we all just need to give ourselves a big virtual hug,” he added while speaking to The Associated Press. He further said that he was lucky to have grain left on his property after a mouse plague, which subsequently helped him in making the structure of the heart.

With inputs from AP