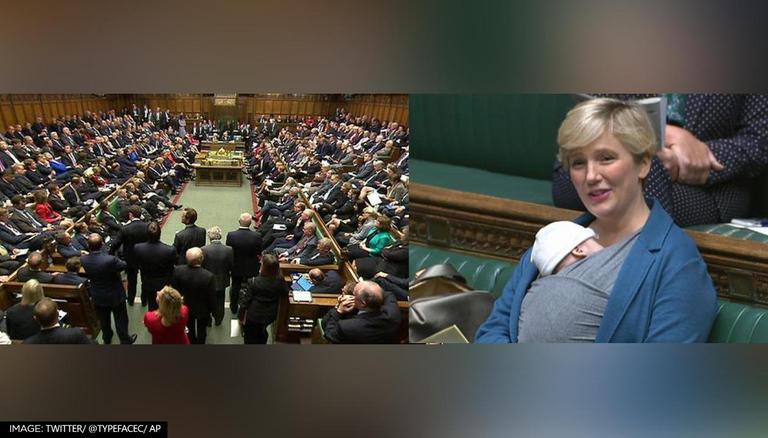 After being told that she cannot sit in the House of Commons with her three-month-old son, British MP Stella Creasy has said that it has to be possible for politics and parenting to mix. According to CNN, Creasy has called for an investigation into the rules around bringing babies into the Commons. On Tuesday, 23 November, she was told by a representative of Parliament’s lower house that it was against the rules to bring a child to a debate at Westminster Hall after she attended with her son.

Creasy shared an email sent to her by the private secretary to the chairman of ways and means. According to the rules, one should not take a seat in the Chamber when accompanied by a child. It added that the rule is also applied to Westminster Hall, which is the oldest building on the Parliamentary estate used for state occasions and important ceremonies. Creasy posted on social media the email she received from House of Commons authorities, telling her that bringing her son to the debate was not in line with the current rules.

Apparently Parliament has written a rule which means I can’t take my well behaved, 3-month old, sleeping baby when I speak in chamber. (Still no rule on wearing masks btw).

Mothers in the mother of all parliament are not to be seen or heard it seems….#21stCenturyCalling pic.twitter.com/rKB7WbYQrL

Following the incident, Commons Speaker Sir Lindsay Hoyle asked the Commons Procedure Committee to look at the rules around bringing babies into the House. Lindsay said that it was “extremely important” for parents to be able to participate fully in the work of the House, which has a nursery. “Rules have to be seen in context and they change with the times,” he told the House, as per BBC. Further, Lindsay asked the Commons Procedure Committee to “look into the matter”.

Meanwhile, Deputy Prime Minister Dominic Raab said he had “a lot of sympathies” for Creasy. Raab said that politicians needed to make sure “our profession is brought into the modern world so parents can juggle the jobs they do with the family time they need”. He also added that baby in the Commons certainly wouldn’t distract him or get in the way of doing his job, however, he said that it was for the House authorities to decide the “right balance”.

UK PM Boris Johnson’s official spokesperson, on the other hand, said that the Prime Minister wanted to see further improvements on making Parliament family-friendly, though any change to the rules was a matter for the Commons. Labour leader Sir Keir Starmer’s spokesman said that it would be inappropriate to comment while the Procedure Committee considered the matter.

Social media uproar after the incident

Meanwhile, several users on social media reacted to this incident and expressed solidarity.

Why can’t @stellacreasy bring her baby to Parliament? They roll out ‘Women to Win’ but then reinforce that women must choose between motherhood and having a career

Astonished at some of the @BBCWomansHour responses to @stellacreasy bringing her baby to work. Such a lot of “I wasn’t allowed, so why should she?” If we all thought like that change would never come.