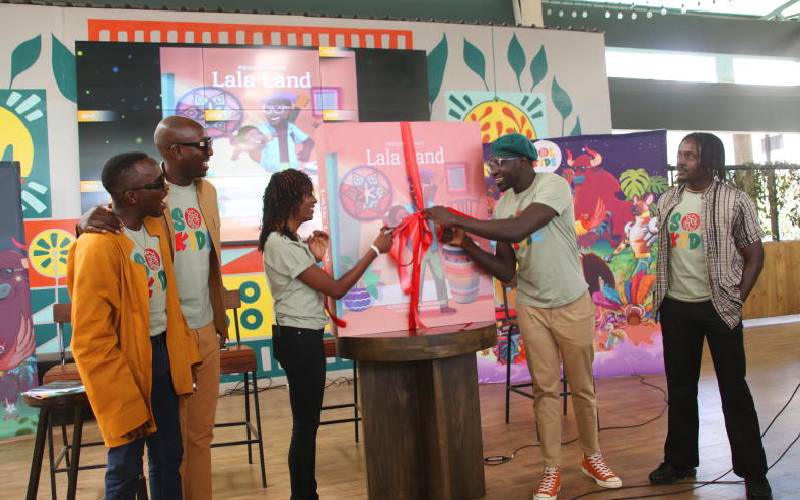 Kenyan boyband Sauti Sol has now ventured into children’s content creation. This saw the recent launch of Sol Kids, together with Melisa Wakhu.

All these have been captured in their new project, which incorporates the ‘Alone Together’ project initiated in 2021.

Bien’s focus is on a comic dubbed Bald Men that features Jazz maestro Aaron Rimbui with whom he released the hit Bald Man Anthem.

“It was my first piece of work as it speaks to a pop-jazz album I did with Aaron Rimbui. That is for a mature crowd but Melisa and I are now working on a children’s book in a five-part series talking about different things in the western province,” said Bien.

Why is he the superhero in his own comic?

“Everywhere where the bald man goes everything he does is done in love, peace, courage and self-love,” he said.

“People made fun of me for so long for being bald and I said that I will turn this into a movement of self-love and its rewarding and the glow outside is a reflection of the inside,” he added.

Superheroes and villains are part of comics and in this case, expect a Jones and Omondi as the villains in this story.

“Ukiwahi kuwa na beef na mimi ujue tu ntakuweka kwa kitabu. (If you ever have ‘beef’ with me just know that I’ll put you in the book). Khaligraph Jones na Eric Omondi have found themselves on the wrong side of the law na they have to face my wrath,” Bien said laughing.

The so-called ‘beef’ between the three has made social media news but the singer said it’s all fun.

“At the end of the day guys, it’s all just for fun. Eric Omondi and I are not … I don’t hate Eric Omondi. He is looking for his bread the best way he knows how. I love Khaligraph, what you mean…he has cute kids…Who doesn’t love OG…he is a teddy bear man,” he said.

Does doing children’s content mean Bien Junior is on the way?

Baraza looks forward to having kids but leaves the decision to his wife, Chiki Kuruka.

Polycarp’s release of Father Studies was an expression of fatherhood. This has seen him release his first kid’s book Written in the Stars and now Lala Land.

“My inspiration is really my son. As a man, you prepare and try to see how you’re going to raise this child and many things were running through my mind mainly how to instill values in him cuz it’s my responsibility,” he said.

He said realised that most content consumed by the younger generation does not focus on African culture and therefore he decided to change the narrative as he has the power and leverage to do so.

Back in 2012, the group embarked on the ‘Soma Soma’ initiative geared towards driving the education agenda by educating the less fortunate.

Sol Kids is a continuation of the initiative, with Polycarp adding that some of the proceeds from book sales will be directed towards that.

“It is targeted to a bigger demographic. We know that there are many places where kids cannot access nor afford the books so we are looking at a mechanism and partnerships to find a way in which part of the sales will be donated to buy books for schools,” he said.

He is deep into books but still venturing into music. He however assured his fans that he is not putting a halt to music and we should look forward to the release of another Sauti Sol album.

Is Sauti Sol’s crown firmly on Bien’s head? Whether they are stronger together or have what it takes to make it as solo artists is the question that the bald man confidently answers.

“Bien doesn’t mix and Master Sauti Sol work, Polycarp does. Bien doesn’t style Sauti Sol videos, Chimano does. Sauti Sol is made great because the four of us are Sauti Sol. Bien can also be great by himself and so can the rest of the boys. We need to stop having a comparison mentality. You don’t have to compare people all the time,” Bien said.

Why then the solo paths?

“It’s important for people to actually look at what the exercise is about. It’s about knowing us deeper as individuals so I hope that comes across,” he added.