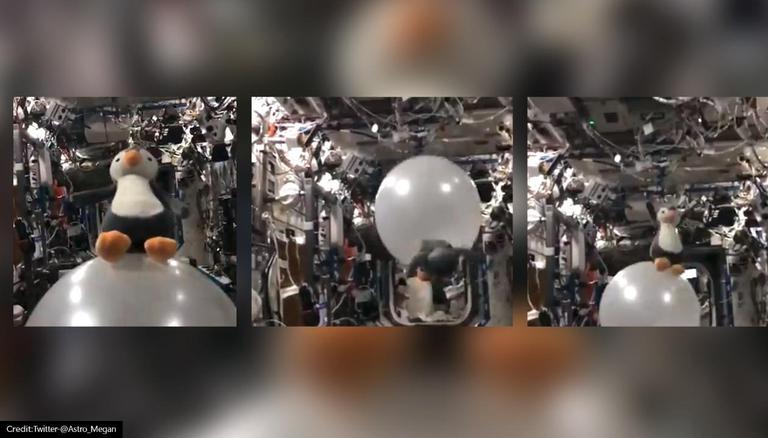 The video was shared by Megan McArthur on Twitter alongside the caption, “I thought Space_Station would be a good place for my friend Guin-Guin to #LearntoFly. Flippers up, let’s go!”. The video showed toy penguin Guin Guin Guin attached to a transparent balloon. McArthur gave the balloon a flip, that led to the penguin flying at at distance. The penguin then floated around in zero gravity. Watch the video here:

Since being shared on Twitter, the video has garnered over 34K views and several reactions. Netizens, amazed by the moment shared their views in the comments section. One user commented, “Would a balloon stay inflated in the vacuum of space? I understand you’re in a pressurized Space station would the balloon bust if you were to ejected out the airlock or take it on a space walk?”. Another user commented, “Much fun, but the gondola of a balloon or airship for Guin-Guin is a little bit imperfect.” Another individual commented, “His flight skills are definitely out of this world lol”.

GuinGuin (or as i unofficially cal “Space Tux”) is just a literal “flipper!”

Much fun, but the gondola of a balloon or airship for Guin-Guin is a little bit imperfect.

I hope Guin-Guin has a strong stomach or you’ll get tiny squid everywhere.

he’s too cute but he still needs to improve ! Thank you for sharing these moments with us !

Meanwhile, European Space Agency astronaut Thomas Pesquet and National Aeronautical Space Agency astronaut Shane Kimbrough are currently aboard the International Space Station. Pesquet often shares pictures and videos taken from space on his social media account. In his latest post, Thomas Pesquet has shared a picture in which his fellow astronaut is photobombing his spacewalk selfie. Pesquet shared a selfie on Twitter in which he was ‘photobombed’ by his colleague Shane Kimbrough. Kimbrough was seen hanging upside down in the background.