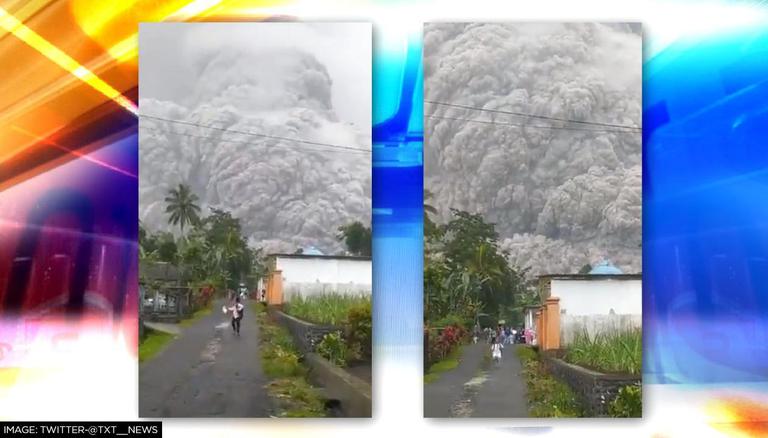 On Saturday, Indonesia’s highest volcano located in the most densely populated island of Java spewed thick columns of ash into the sky, causing panic among locals. A number of videos on social media showed people fleeing their homes out of fear and in anticipation of a huge tragedy. Mount Semeru’s unexpected eruption in East Java buried numerous settlements along its slopes with falling ash. A thunderstorm and rain accompanied the eruption, pushing lava and smouldering debris to the surface and forming thick mud that led to the collapse of at least one bridge connecting the two main villages of Pronojiwo and Candipuro. It also hampered the evacuation, stated Lumajang district administrator, Thoriqul Haq, reported the Associated Press (AP) citing TVOne.

“Several villages have been reduced to darkness by thick columns of ash,” Haq said, adding that hundreds of residents have been relocated to temporary shelters or relocated to other safe regions. Semeru, which stands at 3,676 metres (12,060-feet), last erupted in January, with no fatalities. Because it sits along the Pacific “Ring of Fire,” a horseshoe-shaped sequence of fault lines, Indonesia, an island of more than 270 million people, is prone to earthquakes and volcanic activity.

Have a look at some of the videos here

for MOA and the surrounding community to stay alert and maintain a safe distance from the eruption point.

The eruption recorded on seismograph with maximum amplitude of 25mm

A warning was issued by the Volcanic Ash Advisory Centre after a plume of smoke and ash ascended to an estimated 40,000 feet in the air and began pouring down on houses below. The eruption was recorded on a seismograph with a maximum amplitude of 25mm and a duration of 5160 seconds, according to MAGMA Indonesia, an information service that reports on volcanoes, earthquakes, and tsunamis. Incandescent lava avalanches were seen flowing 500-800 metres down the volcano, INDEPENDENT reported citing the Centre for Volcanology and Geological Hazard Mitigation.

Meanwhile, Budi Santosa, the chairman of the regional disaster management agency, claimed that Mount Semeru’s activity has increased, with hot ash clouds falling. According to him, falling ash was seen in Lumajang, Sumberwuluh Village, Candipuro District, Supiturang, and Pronojiwo, and people were urged to leave these regions. It should be mentioned here that Mount is the tallest mountain on the Indonesian island of Java, and one of the 130 active volcanoes in the country. It has erupted at least 55 times since 1818, with 10 of those eruptions resulting in fatalities.