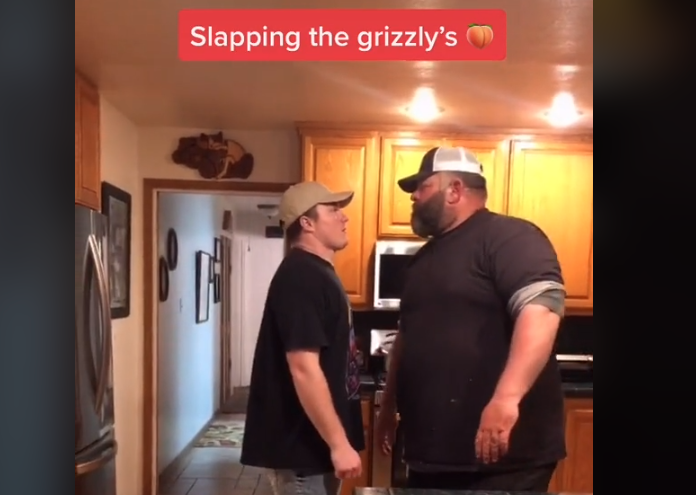 Tex on the right and Keith, his dad, on the left are hits on Tik Tok with classic son vs father tension frequently dissolving into slapstick humor. [Photo provided]

Eureka resident Tex Keith and his father John Kelly have become social media sensations in only four months. With 2.2 million followers from all over the world for their TikTok videos, the 24-year-old former CEO of his own brand management and production company who is now an actor and comedian said it’s been a whirlwind.

“It started in January when I pranked him and he said, ‘Don’t post that!’ But I broke the rules and posted it anyway. We got a lot of great feedback,” Keith said. Almost overnight they had 26,000 followers.

“I said to my dad, ‘We could do something really special with this,’ and he saw the reactions and said ‘I’m on board to help you with this.’” explained Keith.

It sounded like a good idea at first #foryou #dadjokes #countryliving

He added that the simple but deep dynamic of their father-son interactions is what has made the videos so wildly popular.

Usually 30 seconds or less, they often show Keith approaching his father with the video’s trademark, “Hey, Dad” and attempting to mess around with him. “Dad is a 6’ 6”, 380-pound bear of a man,” said Keith. “Dad’s role is that of the serious, quick witted, old-school (guy) responding to a silly son that really only makes it out alive because he’s his son. His responses are always short, funny and a smack to the mouth that shows who’s boss. He is the star of the show. I write the comedy, but it wouldn’t work without him.”

“Sometimes we have that sentimental content that shows the sort of unique relationship and love a son and a father have for each other.” One of the videos above shows Keith waiting at the door as his father comes home. He says “I love you,” Kelly says “I love you” and they embrace. “He’s affectionately called Papa Grizzly Bear and there’s a way he comes across in the videos, but, in reality, he’s a super kind guy and also the hardest worker I’ve ever met.”

Reply to @dadveteranfirefighter He’s a good dad, hope to be half the man he is❤️ #foryou #countryliving #lifestyle

♬ The Man I Want to Be – Chris Young

John Kelly is a Co-Owner of Humboldt Construction and has now found himself in the position of being a bit of a media star. “He’s been stopped by people a couple times and other times I’ve seen people start to come up to him and then decide not to,” laughs Keith.

Keith and Kelly have followers worldwide. “They’re from Malaysia, Germany, Poland, Denmark and France, to name a few,” said Keith. “It’s really wild, getting social media comments from all over the world.”

“We get 1000 messages per week or more,” he said. “and they mean a lot. People need laughter during this time more than ever, laughter cures.”

The Tex and John TikTok videos have been featured on social media news sites such as Right This Minute and the LAD bible. The Daily Mail UK has featured them and the two have followers like Jenny McCarthy, host of the Masked Singer and social media star SusiVidal. They also have a website at Texkeith.com featuring clothing merchandise designed by Keith.

Who you got your money on? Me or gentle giant❤️? #foryou #QuickerPickerRapper #countryliving #therock

Keith is moving to West Hollywood on July 1st to pursue his acting career. “I’ll be hitting the pavement and auditioning as much as I can.” The future of Tex and John is bright though. “We’re going to drop 300 videos, at least one a day,” Keith said. It looks like the duo will continue to be feeding their fans videos for quite some time. They can be found on TikTok under TexandJohn.