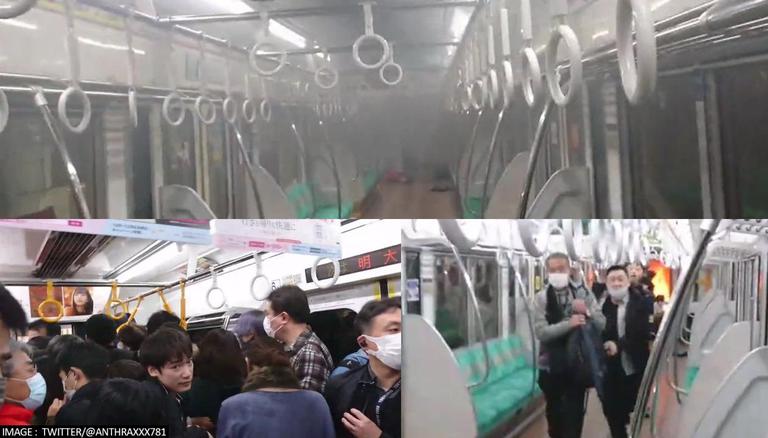 An unnamed man behind a deadly fire attack on a metro train in Tokyo on Sunday, that injured at least eight, was detained by the Japanese police, local Kyodo news reported. The suspect had spread a flammable liquid around the train and set it on flames. The Japanese police responded to the incident at around 8 pm after receiving a call regarding the massive fire. Reports suggest that the cops were told that a suspect swung a knife around on the Keio Line before spilling flammable material around. Tokyo police authorities told local press that the attack happened inside the Keio train near the Kokuryo station, and the motive is unknown.

Footages that emerged on social media showed the panic-stricken crowd on the train running haywire as the blazes spread inside the train compartment. A man, reported injured in his 80s, was seen unconscious as the crowd went berserk following the attack. Reports suggest that the suspect, now under police detention, was seen brandishing a knife on the Tokyo commuter train and he stabbed several passengers before lighting fire inside the train. Japan’s public television NHK had reported earlier on Sunday that at least 10 passengers were injured, one among them was serious, but later, corrected the figure to eight.

Man in his 20s mmediately apprehended

Harrowing visuals that emerged on Twitter showed petrified passengers trying to escape the fire by jumping through the windows as the Keio Line train caught fire at the station. The attack comes just shortly after the polls closed in the country’s general election. In August, similarly, at least nine people were wounded, one of them critical after a stabbing attack on a commuter train in Tokyo. The suspect had allegedly fled the scene. In one of Japan’s worst mass killing in almost 20 years, a 41-year-old man named Shinji Aoba in 2019 used gasoline and torched the renowned Kyoto Animation studio, killing 34 citizens. The arson attack on Sunday comes as a shock and at a time of festivity when the party-goers were heading to the city center for Halloween celebrations. The accused, in his 20s, was immediately arrested.