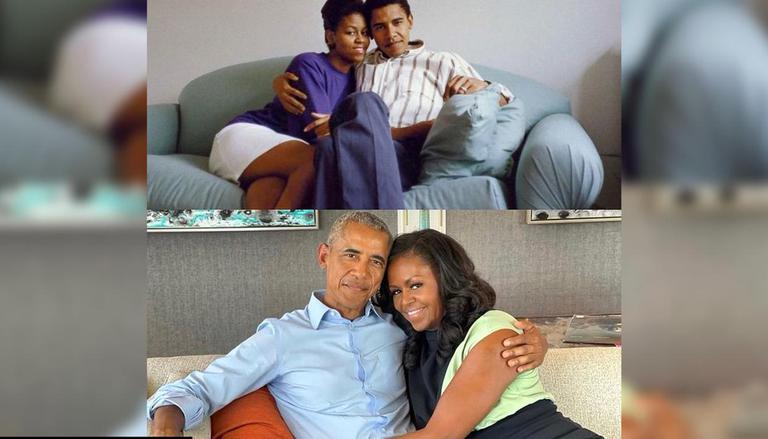 On Sunday, October 3, Barack Obama, the former President of the United States of America, and his wife Michelle Obama marked their 29th wedding anniversary by exchanging sweet messages on social media. The two have been an example to countless couples around the world, and their love anniversary posts for one other have captured the hearts of netizens.

On the occasion of their wedding anniversary, the former First Lady of the US took to Instagram and shared a post following a popular trend that showcases how things were before and how they are now. “How it started vs how it’s going. Happy anniversary, Barack— love you! [sic],” read the caption of the post. Her post comprised a two-image collage. One image depicts the Obama couple when they were younger, while the other is more recent.

The post has gone viral on Instagram and other social media platforms since being shared around 17 hours ago. As yet, it has garnered more than 2.8 million likes and the numbers are only increasing. Besides, it has also accumulated a plethora of comments from people.

Reacting to the post, one of the users wrote, “Remember your wedding like it was a moment ago. Love, family, friends, hope [sic].” “Elegant, simple, and with love. You are such a model to follow [sic],” wrote another. “Happy Anniversary to the most awesome couple that were representing our Country! Happy Anniversary President Obama and Michelle Obama!! [sic],” expressed a third.

“Aged like fine wine!!! My forever POTUS and FLOTUS! We miss and love you both! [sic],” read a comment. Meanwhile, many of the users dropped emoticons in the comment sections wishing the couple on their anniversary.

Here are some reactions by users:

Meanwhile, former President Obama also took to Twitter to share a couple of pictures with his wife on the occasion of their anniversary. One photo shows them seated on a couch, affectionately holding one other, while the other is a back-of-the-room shot of them standing by a window.

He also wrote a love note for his wife, Michelle, and stated that he couldn’t picture his life without her. “Happy anniversary, Miche! Over the past 29 years, I’ve loved watching the world get to know you not just as a daughter of the South Side, but as a mother, lawyer, executive, author, First Lady, and my best friend. I can’t imagine life without you,” Obama captioned his post.

Happy anniversary, Miche! Over the past 29 years, I’ve loved watching the world get to know you not just as a daughter of the South Side, but as a mother, lawyer, executive, author, First Lady, and my best friend. I can’t imagine life without you. pic.twitter.com/SEXc9jMXPl