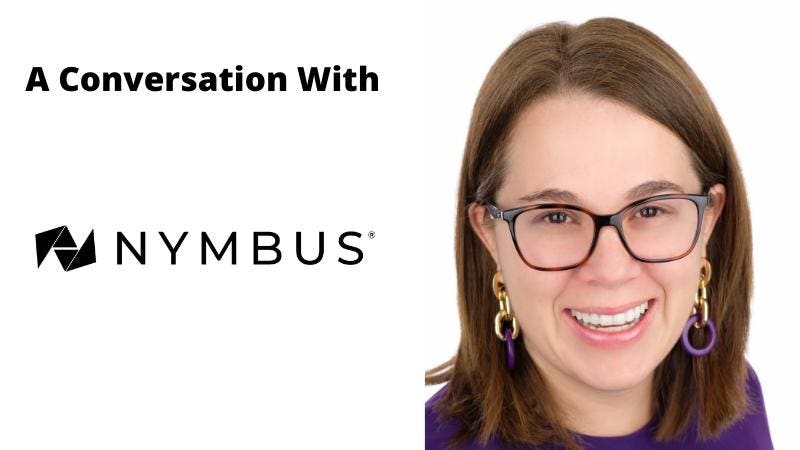 Marketing is evolving to be more human, authentic, and emotive than ever before, while at the same time being forced to pivot from being an ethereal, touchy, feely “thing,” to an engine that drives an organization’s value delivery system. As a result, generating brand experiences that truly engage at scale, while possessing the ability to be adaptive and fluid, has never been more important.

For my most recent column, I wanted to speak to someone intimately familiar with these themes, but also an expert in agilely innovating to best meet customers where they are. Allison Netzer is the CMO of Nymbus. While she has unparalleled knowledge of what it takes to succeed in the aggressively competitive fintech space, her career has spanned many sectors at brands such as Dell, Kony and Tenemos. Allison is the co-author of the upcoming new book Think Like a Brand Not a Bank, which I had the privilege of getting an early look at. It’s a great toolkit that any marketer can avail themselves of today to figure out how to build relationships with customers in ways that they value. Following is a recap of our conversation:

Allison Netzer: I do believe that the “think like a brand” framework is absolutely applicable outside of banking and financial services. I’ve worked across retail, technology, hospitality, and healthcare and I wish I had a guide like this back then because when businesses say they want to attract a new audience, or build loyalty, or really any other growth initiatives, I believe what they’re really saying is that they need a brand-first mindset. I think it’s counterintuitive, even today, because we’re still thinking of brands as the visuals, as the domain of marketing, instead of brand really being the mindset throughout the whole organization. A great brand can be the product. In some cases, it can also be the mission. We still have a long way to go in bringing brand into the strategic fold, as opposed to keeping it separate.

Howard: Makes perfect sense. One of my favorite things that you pointed out in the book was the mash-up of Prince Charles and Ozzy Osbourne to show why demographics alone are flawed. I really like that for many, many reasons, mostly because as you know, everything in my own business is built on the fact that homogenizing cohorts is dangerous. What are ways that banks, or any corporation, should put more of a brand, or human contextual lens, on their first- and zero-party data?

Netzer: Unfortunately, as you point out, banks, and most corporations, still rely on basic demographics. This often happens either because it’s all they have, or because it’s easier, and when they do this, they miss the opportunity for meaningful connection. At worst, as in the case with Prince Charles and Ozzy Osbourne, you alienate an individual or an audience. Prince Charles and Ozzy Osborne were both born in England in 1948, married twice, have kids and a high net worth. If you just went on demographics, you would be marketing to them the same way when clearly, they are very different individuals.

When you ask, what are some of the ways that people can put more of a contextual lens on things, sometimes it’s also finding the humor and the irony. If all of this was easy to do, it would have been done by now. Many marketers are missing something as this type of thinking is not the norm. To start to move toward this type of thinking, you’ve got to add emotional contextualization to the raw data. It’s just putting it into real examples of where you could have majorly screwed up by just following demographics. While it’s not a usual go-to for me, putting a little fear into the process can also be really powerful. In banking, fear is also a really big motivator. It’s showing both types of that thinking in equal parts.

You’ve probably found this to be true as well, customers that feel a true emotional connection spend 52% more. They shop more and spend more than those that have a purely functional brand relationship, i.e., a demographic type of relationship. That’s for all industries and financial services. Lifetime value is also 35% higher when a real emotional connection exists. There’s a strong business case for human-centered data, no matter your industry. All the data points I cited are from a recent Harvard Business Review piece on this topic.

Howard: Awesome insight. Thank you for that. You have a specific section in the book called ‘Samsung with a side of Apple.’ My takeaway was emotion trumps mere product, and as we know, that’s always been the Holy Grail. What are new ways that we should be thinking about building emotional engagement as the definition of both brand and brand emotion has changed and goes way beyond a logo, as you point out?

Netzer: Emotion trumping branding is a key takeaway. I think some new ways to think about this is, and it may sound a little counterintuitive, is understanding that building emotional engagement starts inside the company. I firmly believe how you feel about something internally, always manifests externally. You know, we all have the classic example of “we had the best product ever, but nobody heard about it.” There are also businesses that on paper should not have worked but do because of the conviction behind them.

While this may sound a little hokey, you always must make sure, regardless of your role, that you find something you can deeply relate to in the product or service that you help produce. Embarking on that kind of quest to find connection should push you. My second recommendation would be to seek out stories in people instead of features and benefits. Another way to think about building emotional engagement is to spend as much time thinking about the distribution channel, as the content. What I mean by this is there are so many ways to reach an audience. It’s very tempting to either blast the same thing across a bunch of channels, or channel chase what’s new. The challenge with that is you’re really working twice as hard to move people to the channel that you prefer, rather than meeting the customer where they are. It sounds simple, but in brand-first thinking, does it mean putting your brand ahead of the customer? No, it means thinking about how to create mutual value. Every step of a brand experience on its own does not produce value. It’s only produced when there’s a mutual agreement of that value.

Howard: I love that. In talking about this idea further, a lot of people, you not among them (laughs) still separate things into silos, and data and emotion are two of the things that people still do that with. With that in mind, what is the best way to think about the relationship between the two to achieve emotional engagement at scale?

Netzer: A lot of companies do operate as if data and emotion are, or should be, separate. Many banks use data to tell them how they should feel about a particular audience, or they use non statistically significant sentiment data, for example, a single online review, to guide to guide decision making. One of the things that I loved about your Insights 2022 report is when you talk about emotional engagement at scale, it’s got to be all about the timing. We focus so much on what are the tactics? What is the martech? But, we don’t talk a lot about the timing when it comes to leveraging data to build an emotional connection.

In your report, you talk about getting into the customer’s headspace to influence them much earlier. We often don’t talk a lot about the before, or the in-between when it comes to using data. We don’t talk about an iterative approach to our processes, right? It’s a set journey keyed into a CRM, but data is fluid. Emotion is fluid. Brand is fluid. Your use of all these things has got to be fluid as well. Fluidity and repeatability are also not mutually exclusive. Fluidity and scale are not mutually exclusive. A good example in the market is ‘Morning Brew.’ It’s a good example of a company that kept its brand-first foundation, while still using real-time reader feedback, credible amounts of data and sentiment.

They create a lot of new products and services. Some of them work, some of them don’t. They have a sense of humor when it does. or doesn’t. They are also truly at scale in a distribution channel that makes sense for their audience, and they’re not changing it. To me, that’s scale, yet very fluid. They’re not setting and forgetting, you know, some customer journey that you’re on feel that way and you can tell.

Howard: That’s very well said and simple. You’re a very good storyteller. Why don’t we conclude with your perspective on scaling your entire ‘think like a brand’ model because scaling anything is difficult, let alone a comprehensive end-to-end thought process as you have articulated in your book. What are the most critical elements required for the achievement of that goal?

Netzer: That’s a really good question. Going back to the Samsung example, what we also explore in the book, which I think is applicable across really any industry, is the traditional mindset. If you build it, they will come. We know that that isn’t necessarily true today. I don’t think people actually use products and services. They consume them or as you often say they subscribe to them. Brand-first thinking must be consumable versus, the trend in the early 2000s of brands being more aspirational than accessible.

Apple has made that pivot well. It’s kind of weird that in 2022 we’re talking about Apple being more accessible. But whether obvious or not, they have continued to grow because of that accessibility, because I think that they’ve recognized that people consume, they don’t just use products and services. In the book, we talk about why having that type of mindset matters. Some of the things we’ve talked about in this interview inform that mindset of a brand not being something so soft and fluffy. It’s not a marketing exercise. There are hard returns that come from doing the counterintuitive thing. The awesome part about that is if your industry is being disrupted, it’s a great time to get away from binary thinking, right? When everything is just a complete storm, zigging when people should zag becomes such an awesome opportunity to do so without fear of repercussion.

The other piece is establishing a creative process to get to brand-first thinking. That said, it doesn’t mean throwing everything out and starting at zero. It can be super tempting to do that. However, when you do that, you lose momentum on the aspects of your strategy that were actually working. The right way to begin to execute at scale is making your decision smaller for yourself, or your customers, remixing what you have, not starting from scratch. I think what’s most important here, and I’m emphatic about it, is that people think a product is a vehicle for value, but it’s not the value. Value is a shared thing. It’s no longer set by companies. It’s now a mutual exchange between customers and a company, which is pretty awesome and a strong indicator of how the future of commerce will unfold.