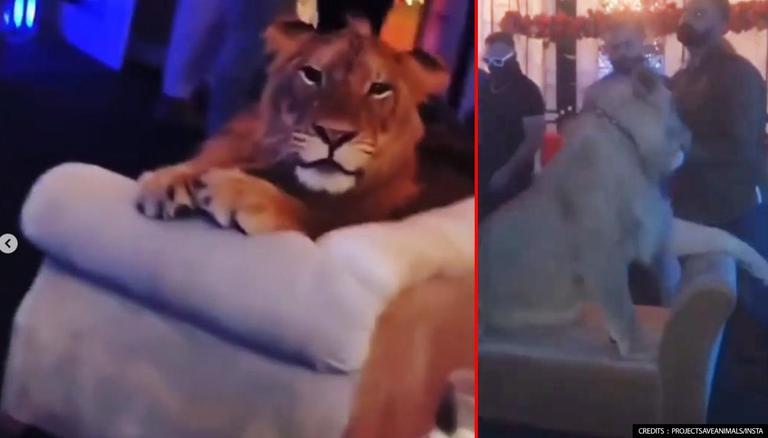 An influencer in Pakistan has recently come under fire for using a lion as an entertainment prop at a party. Videos from influencer Susan Khan’s party have sparked outrage on social media as the lion can be seen chained up and surrounded by people amid loud music. The footage shared by Project Save Animals shows the lion lying on furniture at the party venue in Lahore. At one point during the compilation of clips, Susan can also be seen petting the wild cat.

“Lions were shackled left and right and paraded as if they were a new decoration piece, which they’re not, obviously,” the part of the caption on the post shared by Project Save Animals, read.

“Why do we tend to forget that these are living, breathing beings that have the capacity to feel just like you?,” it added.

A separate post read, “This Lion has been sedated, shackled and is being thrusted back and forth just for this woman’s leisure. The seemingly insatiable desire for likes, clicks and shares on social media means that people are going to extreme lengths for the perfect selfie, often endangering themselves and the animals they so desperately want to capture in that envy-inducing image. This is clearly unjust”.

Following the incident, animal rescuer Syed Hassan told VICE World News that the lion appears to be sedated. Hassan even added that the animal’s paws are stubbed, meaning they were “declawed”. A petition has since been launched by Hassan, the founder of Project Save Animals calling for an end to animals being used as entertainment props.

On the petition page Hassan wrote, “With countless cubs and lions being mistreated in Pakistan, we cannot afford to showcase behaviour that seeks to normalize this atrocity. This needs to stop and it won’t until we stand up against this highly problematic behaviour and call those out who are responsible for it”.

Meanwhile, in Pakistan, the elite and influential routinely flaunt wild and exotic animals as status symbols. Licenses and permits are available for a small price. Many notable figures within Pakistan including politicians and celebrities have used lions and tigers for their own means.

Back in March, a couple in Lahore had also sparked fury for using a sedated lion cub as a prop for a wedding photoshoot. The incident had caused a public outcry and there were demands for offenders to be punished. However, no action was taken.