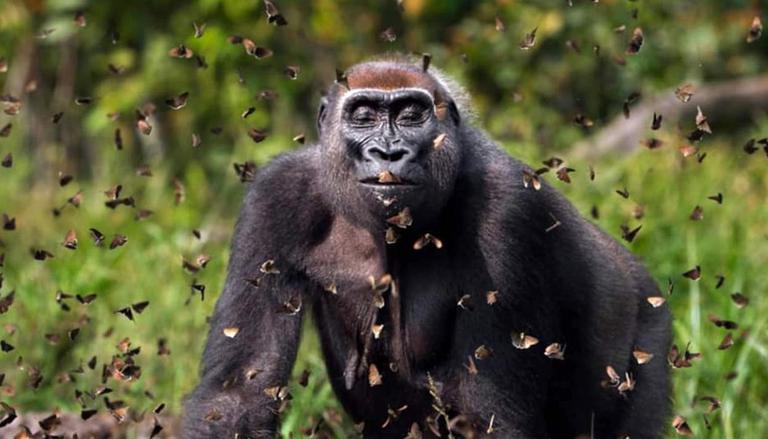 Wildlife photographer, Anup Shah, a resident of the United Kingdom, recently won the grand prize at ‘The Nature Conservancy’s 2021 Global Photo Contest’ for a photograph of a gorilla surrounded by butterflies captured in the Central African Republic. He will receive a camera package valued at $4,000, according to BBC News. The photo, titled Malui, was chosen as the winner after beating out over 1 lakh entries. The brilliant photograph showcases a western lowland gorilla walking out cheerfully through hundreds of butterflies. The Nature Conservancy is a global conservation organisation that works across 72 countries to protect the lands and rivers that all living things rely on. It claims to be guided by science in developing on-the-ground solutions to the world’s most pressing problems, such as climate change. The charity organisation located in the United States has been working since 1951 to build a world where humans and nature can coexist.

“I like photos that keep dragging you in. The gorilla’s face; tolerance or bliss? It’s really hard to tell and the insects draw you there,” Ben Folds, the competition’s judge and renowned musician was quoted as saying by BBC News. It should be mentioned here that Shah also got an honourable mention in the Wildlife category for his captivating photograph of wildebeest running through Kenya’s Maasai Mara National Reserve. The Nature Conservancy’s Chief Marketing and Communications Officer, Meg Goldthwaite, described the photographs as “amazing and lasting reminders of nature’s brightness and awe-inspiring power.” “These scenes from throughout the world astound, thrill, and move us year after year. They energise us as we continue the crucial mission of safeguarding the lands and rivers on which all life depends,” she was quoted as saying by LADbible, a British social media publisher.

Nature Conservancy has over one million members worldwide

It should be mentioned here that Prathamesh Ghadekar’s photograph of fireflies gathered around a tree before a downpour won the People’s Choice prize. The image was created with a tripod and 32 shots, each with a 30-second exposure. Meanwhile, the photo of a baby orangutan being prepared for surgery by Belgian photographer Alain Schroder won first prize in the ‘People and Nature’ category. Brenda, a three-month-old orangutan, is surrounded by veterinary workers in the photo, reported LADbible. Notably, as of 2021, the Nature Conservancy has over one million members worldwide and had preserved over 119,000,000 acres of land and thousands of miles of rivers.