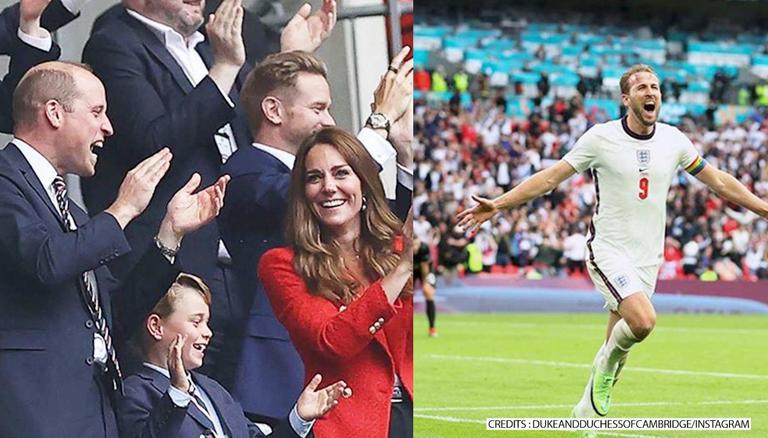 Prince William and Kate Middleton on June 29 joined all the other England fans along with their son Prince George to watch the England vs Germany match at Wembley stadium in London. It was the first time that Duke and Duchess of Cambridge attended a game together and they also shared glimpses of cheering for England around the fans on social media accounts. In the images, Prince William, Kate and seven-year-old Prince George attended the match in formal attires skipping the England jersey for the young future king.

The royals joined thousands of England fans who descended on the capital and many of them sang and brandished flags ahead of Euro 2020 last-16 clash with Germany. The Three Lions had braced themselves for the country’s biggest match on home soil since Euro 96 and over 40,000 supporters attended the match at Wembley. Apart from the royals, several other celebrities including Ed Sheeran and David Beckham Rapper Stormzy joined the spectators. While the Duke and Duchess of Cambridge hailed the “incredible performance” of England, the team defeated Germany 2-0.

Just last week, Prince William who is also the President of The Football Association attended the UEFA EURO 2020 soccer match between the Czech Republic and England at Wembley Stadium on June 22. Even in his previous appearance at the game, the Duke of Cambridge wore a navy suit but at the time, his wife Kate or children Prince George, Princess Charlotte, and Prince Louis were not present.

In May, during his tour of Scotland, Prince William was also among the spectators who watched the Scottish Cup final in Edinburgh with emergency service members along with their friends and families. During that trip, Prince William had also got the chance to showcase his skills in soccer. During a “control and finishing drill,” the Duke of Cambridge fired off several shots to get past the goalie.

“Football is powerful in so many ways,” he said in a social media post. “Not only in its ability to bring people together like yesterday’s and today’s events but also how it uses its platform to continue the conversation on mental health.”