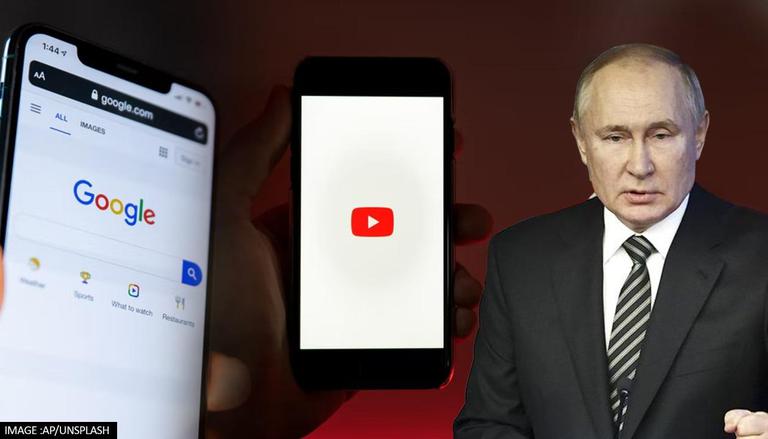 Following its ban on social media websites like Facebook, Twitter and Instagram, Russia has now taken a hit at US-based tech giants Google and its video platform YouTube. Russian regulators on Friday accused Google and YouTube of “terrorist” activities, in a possible first step towards an access ban. The authority claimed that the video platform was broadcasting ‘anti-Russian videos’ amid the ongoing Russia Ukraine war.

Russia had earlier announced an access ban on global media tech giants like Facebook, Twitter and Instagram. The restriction had come alongside an access ban on all independent media. Following this, Russian media regulator Roskomnadzor has now accused YouTube of letting users share adverts against the Russian administration. It claimed that videos on the platform were calling for the communications systems of Russia and Belarus’ railway networks to be suspended and it was being broadcasted as part of anti-Russian propaganda.

“The YouTube administration’s activities are terrorist in nature and threaten the life and health of Russian citizens,” Roskomnadzor said, quoted by Interfax news agency. “Roskomnadzor categorically opposes such advertising campaigns and demands that Google stop broadcasting anti-Russia videos as soon as possible,” it said while denouncing Google’s “anti-Russian position”. Russia had imposed heavy restrictive measures on media following Putin’s announcement of the Ukraine invasion. Moscow now seems to be looking at a possible ban on Google’s YouTube.

Notably, Instagram, which is the most popular social media website in Russia, was spared in the first round of sanctions but later Meta was accused of allowing anti-Putin sentiments on Facebook. Therefore, it might have been tagged as an “extremist organisation” by Roskomnadzor leading to its subsidiary Instagram’s ban. Facebook and Instagram’s parent company Meta said that the temporary alterations in the hate speech policy toward Russia are applicable to Ukraine’s users only as, after the Russia-led war on Kyiv, it is incorrect to prevent Ukrainians from ‘expressing their resistance and fury at the invading military forces.’

Russia, although has banned Facebook, opened a criminal probe against Meta’s hate speech policy wherein Russian prosecutors has sought that the court deems the US social media giant as an ‘extremist organisation’. Interestingly, as the Kremlin continued to cut down on its online space and even restricted access to social networking application Instagram, Russia-based tech entrepreneurs are set to launch a photo-sharing application called Rossgram, to replace the Meta owned app within the domestic market. The new application is slated for launch on March 28.