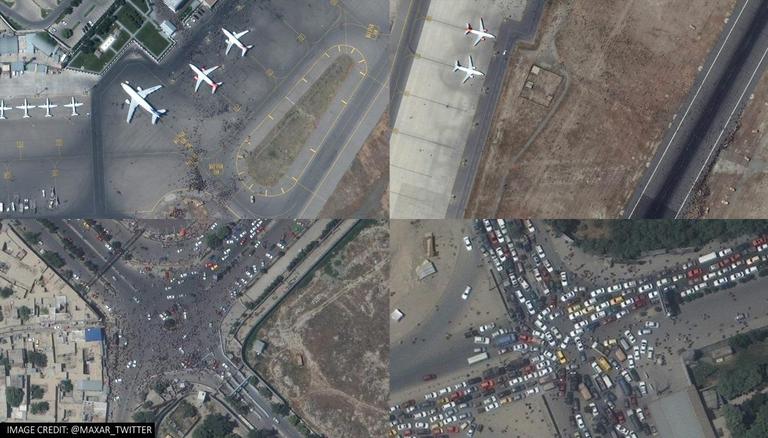 Chaotic scenes at Kabul’s Hamid Karzai International Airport continued following the Taliban’s takeover of Afghanistan on Sunday. Thousands of Afghan civilians have swarmed the airport in a bid to escape from the country which is currently under the insurgent group. Satellite images captured by Maxar Technologies show the grave crisis unleashed in the war-torn country as desperate Afghans attempt to flee.

The pictures show several aircraft – military and commercial stranded at the Kabul Airport even as countries scramble to evacuate their citizens and some Afghans. The vacuation operations were severely affected as thousands gathered at the airport waiting for their chance. The satellite images show commercial aircraft, military cargo planes, and even helicopters. This also confirms the intensity of the crisis after several videos that have gone viral on social media. On Monday, a viral video showed Afghans running beside the United States Air Force C-17 Globemaster that was on the runway.

New high-res #satellite imagery (10:36 am local time, August 16) of the chaotic scene underway at #Kabul’s Hamid Karzai International Airport in #Afghanistan as thousands of people converged on the tarmac & airport runways as countries attempt to evacuate personnel from the city. pic.twitter.com/L6lhlVms54

Similarly, the scenario outside and around the Hamid Karzai International Airport was no different. Afghans rushing towards the airport queued in their cars thereby leading to traffic jams. Even at the airport entrance, people struggled to get in as it was already swarmed by others.

Meanwhile, the United States has resumed evacuation operations at the Kabul International Airport on Tuesday, hours after it was closed following a chaotic situation and for security reasons. Addressing the media on Tuesday, Major General Hank Taylor, a logistics specialist on the Pentagon’s Joint Chiefs of Staff informed that the airport was open for operations and services have resumed. In addition, Taylor also informed that by end of the day nearly 3,000-3,500 total troops will be on the ground.

MG Taylor: By the end of the day, we expect nearly 3,000-3,500 total Troops on the ground. As of 1535 local time, the air field was open for operations. Shortly after, the first C-17 landed with US Marines on board. The next C17 is preparing to land as we speak. pic.twitter.com/Osy5VyLNRa