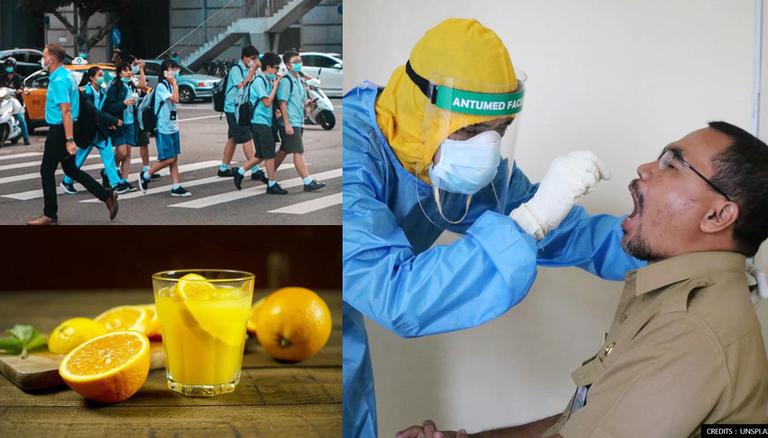 While the world continues to dread the COVID-19 pandemic, some pupils in the United Kingdom found a bizarre way to generate fake “positive” results in COVID-19 lateral flow tests by pouring few drops of orange juice into the lateral flow device (LFD). The trend gained attention amongst kids and popularised after Tik Tok videos showing the ‘hack’ went viral. It is not incorrect to say that school kids all around the world do find random excuses and hacks to miss school, but this time the excuse stirred tensions.

The incident raised concerns when Gateacre School in the UK, told pupils of certain grades to not attend the school while the staff carried out track and trace work after numerous students excused from school and submitted a ‘positive’ result of the COVID-19 test over a weekend. Respective parents after receiving an email and text message from the school were left concerned upon receiving that their kids’ school had a few COVID-19 “positive” tests lately. Until now the school had no evidence their pupils had been misusing the tests with pseudo-social media knowledge.

The school’s email to the parents read, “Nationally, some school students have discovered that placing droplets of orange juice or other fruit juice on an LFD test gets a false ‘positive’ result. In light of this, can you be extra vigilant when your child is doing their LFD tests? Also, remind them that a positive LFD test must be followed by a confirmatory PCR test.”

The pupils pour a few drops of orange juice or lemon juice in order to obtain a fake ‘positive’ result in a COVID test by using LFD. Reportedly, people have been using other edible items including soft (carbonated) drinks, tomato sauces, etc. to generate fake results.

The nettlesome question now arises whether these items consist of contagions of the coronavirus, several reports have confirmed that there is nothing to be suspicious of. The reason behind these tests confirming to be positive on an LFD i.e. if two lines appear in the strip owing to its acidic nature in chemistry. An experiment by Guardian says that the fake positive COVID test results appear to be “linked to its acidity, which essentially breaks the test”. It is the acidic level in the fluid that is likely to cause the phenomenon i.e. double lines on LFD, rather than contagions of SARS-CoV-2.

A warning message was then sent to parents notifying them what their children had “discovered” and the commotion that entailed. The school in Belle Vale insisted parents be “vigilant” thereafter.