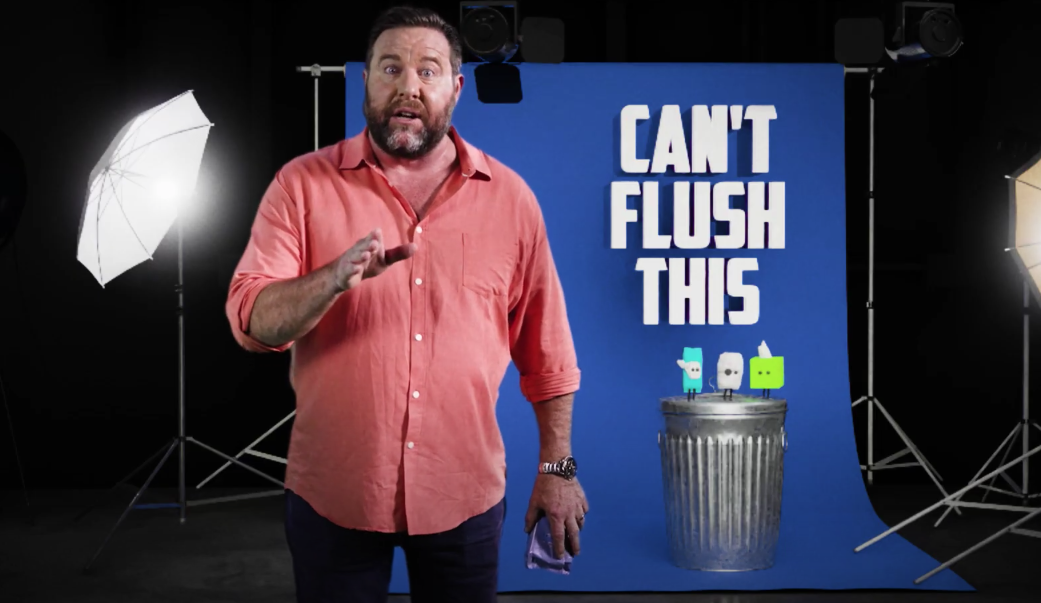 “Are You Flushing Kidding Me” is the clever new campaign launched by Sydney Water’s in-house creative team in a bid to stop 500 tonnes of wet wipes and, other bizarre items, being flushed down the toilet at a cost of more than $14 million a year.

The campaign, starring Sydney Water ambassador Shane Jacobson, tackles the very serious issue of fatbergs. Masses of household waste that does not break down and becomes congealed creating an environmental disaster through the network.

Items including wet wipes, nappies, false teeth, condoms, parts of a prosthetic leg and kids toys are just some of the unflushables found over the past year.

“This campaign is about raising awareness around a critical issue which not only costs Sydney Water more than $14 million a year to fix, but customers thousands in sewage overflows, bathroom and street flooding,” Ms Graham said.

“We’ve used humour to put the spotlight on what can be an unpalatable conversation around what can and cannot be flushed down the toilet.

“The environmental impact is also huge when you look at the number of blockages and overflows which amount to around 870 a month or up to 13,000 chokes across the network a year.”

Following the highly successful “it’s best to bin it” campaign, “Are You Flushing Kidding Me” brings back the much-loved animated characters – the “Flush Mob” and the “Unflushables”.

The campaign focuses heavily on wet wipes which do not break down and cause the biggest blockages.

The most recent customer data shows men aged between the ages of 18 and 29 are the biggest culprits when it comes to flushing the wrong things down the loo.

Minister for lands and water Kevin Anderson said the campaign is about educating the community and working together to solve a critical issue.

“This is an education campaign which highlights the damage caused by people not fully understanding what is right and wrong when it comes to flushing things through the network,” Minister Anderson said.

“Some people are not aware of the enormous costs and environmental damage when it comes to innocently flushing the wrong thing down the toilet.

“If we work together the impact on our environment and the cost to customers will be significantly reduced.”