WORTHINGTON — Following his victory in the Sioux Falls, South Dakota, mayoral race little more than a week ago, former Worthington resident Paul TenHaken visited Worthington High School on Thursday to talk with students — a little about politics, a little about his career, and a lot about finding purpose.

Inside the school’s media center filled with students, he spoke of his unconventional path to political office, starting with growing up in Worthington and attending Faith Christian High School in Bigelow, through the creation of his own company, Click Rain.

TenHaken formed the Sioux Falls-based digital agency in 2008, which focuses on marketing technology. During his presentation, he spoke of the company’s creation coinciding with a shift in political campaigns toward an online presence, thanks to the rise of social media and Barack Obama’s 2008 presidential run. As time went on, TenHaken noticed the political side of his marketing business was growing. At the same time, he began to feel like he should be doing something beyond Click Rain.

“Making a lot of money, trying to make money, is a very hollow existence,” TenHaken shared with the high schoolers. “People like your teachers … they’re not doing this because it makes them rich. They’re doing it because they have a calling. And I just didn’t feel like this company was my true calling. I wanted to help people in a different way.”

Over the next two years, TenHaken began to put into place the pieces necessary to step away from his company and run for political office.

“Where you really start to grow as a person is when you do things that are really awkward and uncomfortable,” TenHaken said. “People who are not successful are people who just stay in the status quo. They don’t challenge themselves. So, for me getting uncomfortable meant leaving my company that I had built to run for political office.”

TenHaken spoke of the difficulties in running a political campaign, and the struggles he’s faced during his four years in office. Mostly, TenHaken spoke about Kent — a homeless poet whom he befriended while he was still running Click Rain, after giving the then-stranger a ride. 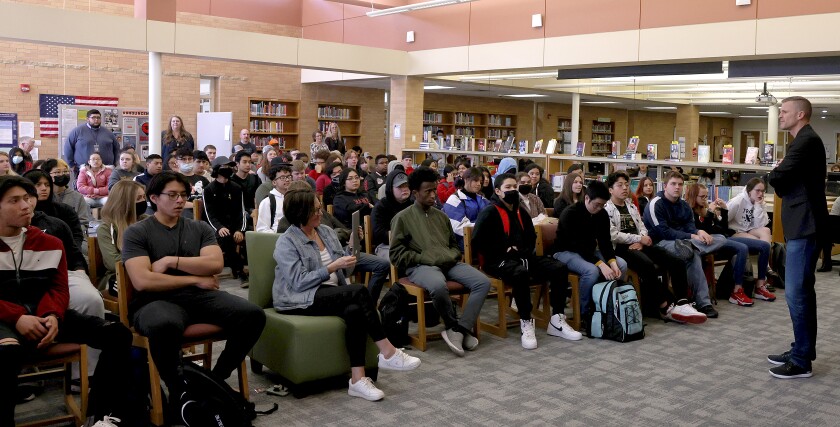 He told students “The Story of Kent” — how they met at a gas station when Kent was struggling, and that he helped Kent secure a job and apartment, even aid him in putting together a Kickstarter campaign to publish his own book of poems. Kent saw his book published, but died shortly after as a result of relapsing.

It’s a bumpy and, at times, disheartening story without a happy ending, but TenHaken says the experience gave him a perspective on serving and caring for people that he otherwise may never have had.

“There are people all around you,” TenHaken said, “people in the school that are struggling, people in this community. I just want to challenge you guys and challenge you to look around. (There are) people who you know are hurting, people who need help — and ask… ‘Hey, what can I do for you?’ Because the pandemic has really highlighted the need for us to help each other more than ever before.”