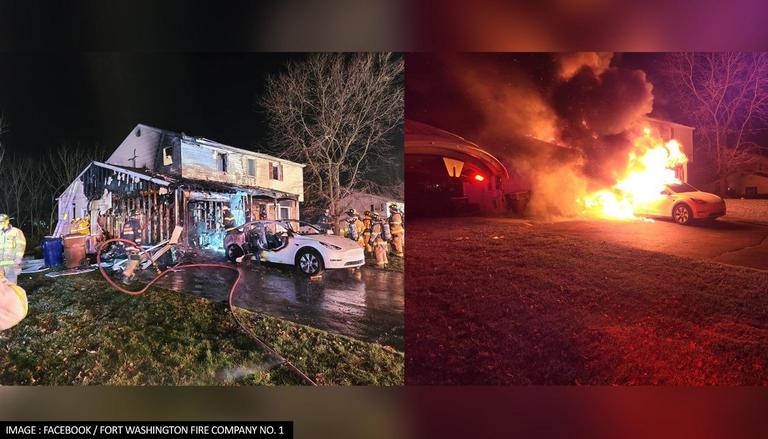 Nearly two days after a Tesla Model S caught fire while charging in their garage overnight, another fire incident was reported in Pennsylvania, US on Tuesday night. According to a report by Fox Business, the fire was contained in less than a half-hour but. Though none of the family members was injured in the incident, the flames spread to a nearby home. Citing the Fort Washington Fire, the media outlet said that the fire was believed to be first engulfed the back end of the vehicle and then leapt onto the attached garage of a Montgomery County home Tuesday night.

Have a look at the photographs of the charred Tesla vehicle:

“At 22:19 hrs on Tuesday, November 23, 2021, FWFC along with mutual aid units were dispatched to a reported house on fire on Temple Drive. Battalion 88 arrived on the scene and found the rear of an electric vehicle on fire which had extended into the attached garage,” read the statement of the Fire service on its social media handle. “Units stretched (3) lines to control the fire and all searches were negative,” added the statement. Further, the fire service said that an investigation behind the incident is underway.

Meanwhile, photographs shared by the fire service department and video shared by the owner cause an uproar in social media platforms including, Facebook and Twitter. Netizens were quick to take a dig at its founder and CEO Elon Musk,and raised grave questions over the claims made by him. It is worth mentioning that this was not the first time when an incident of Tesla car catching fire while charging was reported. Earlier in August this year in US itself, a California couple said that their Tesla Car, a Tesla Model S caught fire while charging in their garage overnight, reported Business Insider.

The couple said that the fire spread to a second Tesla vehicle before engulfing their house in flames. Meanwhile, the following story of The Washington Post said that the couple has not returned to their home until now. In July this year, a new Tesla Model S Plaid reportedly caught fire in Philadelphia while it was being driven, reported BI. Notably, Tesla is the world’s largest electric car manufacturer with an output of 206,421 cars in Q2 of 2021.