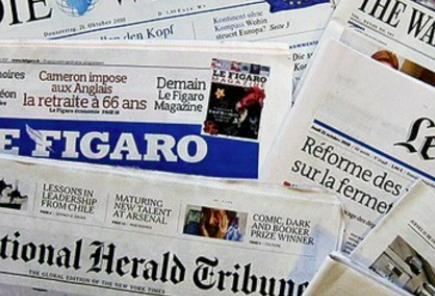 In today’s world, there are many platforms for people to receive and watch the news. There are articles, papers, social media, news stations that allow people to have access to current events happening in the world. Typically, there are three levels of information that the news is broken down into, local, national, and international news.

According to a study done by the Pew Research Center (PRC) about global media coverage, most individuals in America watch local and national news and do not pay much attention to international platforms and information. The study said that 93% of Americans watch national news closely or somewhat closely, 82% watch local news closely or somewhat closely, but only 68% of people watch global news. Of that 68%, only 17% of people claim to watch international news closely. This research shows that in America, people are more focused on events happening within America while not paying attention to events occurring in the rest of the world.

Local and national news sources are very important in keeping people informed on what is occurring in neighborhoods and cities around them. However, they are not the only two forms of news available to individuals.

While Americans are not watching international news as frequently, the world continues to grow and develop, and the term globalization is being used more frequently. Globalization is the interdependence between countries’ economies, cultures, populations, production, technology, and more. The countries of the world are becoming more connected to each other and reliant on the stability and success of each other. The United States relies on the globalization of trade to receive different goods and products that are essential to many businesses and lives in America. The trade that the US does accounts for roughly 27% of the Gross Domestic Product (GDP) in the country. (PIIE)

As globalization spreads, the events that happen in countries worldwide will continue to have an impact on Americans. Events in other country’s politics and economies can impact everyday life in America. Because of this direct correlation, it is important for Americans to pay attention to international news. Current events worldwide have come to impact people’s lives more than ever, says International Money Fund (IMF) reporters Johannes Eugster, Giang Ho, Florence Jaumotte, and Roberto Piazza.

“With globalization and advances in information technology, however, the potential for knowledge to travel faster and further has increased dramatically, opening up greater opportunities for emerging market economies to learn from other, technologically advanced, countries and build their own innovation capacity.”

An example can be seen in the US today. Many stores are struggling to have enough items stocked in stores. Many customers are unable to buy their normal household items. This is because of a global supply chain issue that has made it harder for businesses to produce enough inventory to keep shelves stocked. This is an example of how an international incident can impact the lives of Americans. However, according to the Pew Research Center, only 17% of people are educated on the entirety of the issue.

International news also can give Americans another perspective on current events. Many news sources in the US have become very polarized. Watching international news can give people a less biased and polarized way to get information about the major events happening in the world and the United States. Getting an outside view of an issue can help people better understand issues and be more educated. It also allows people who are put off by the polarization of American news to have a new, less intense way to access the news.

Keeping up on international news allows people to be more educated about the world that we live in. The world is continuously growing and developing and becoming closer with the advancement of technology. According to the researchers at PRC, international news is a way for people to remain connected and informed.