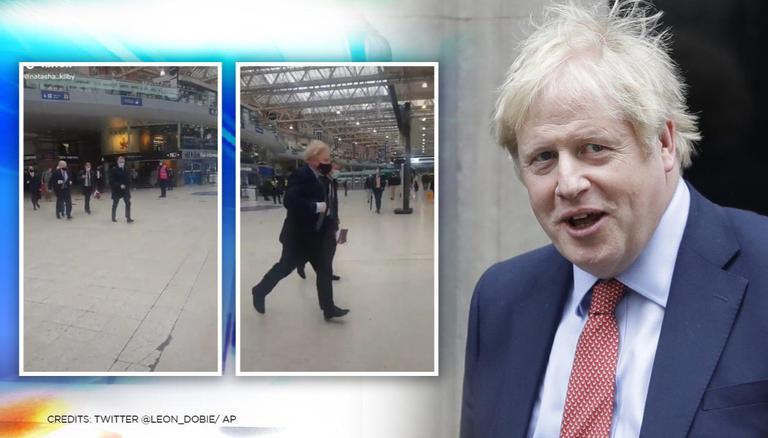 In a rather unusual sight for British citizens, UK Prime Minister Boris Johnson was caught running for a train on a railway station on Friday. In the short 12-second video clip uploaded on Twitter, the UK PM can be seen scrambling to catch a train along with his security personnel all of whom have donned maks in adherence to the COVID protocols. During his sprint, a woman calls out to him to greet him to which Johnson replies with a quick wave.

The video of the UK PM was appreciated by social media who lauded him for catching the train like an ordinary citizen on time instead of making it wait for him.

How can you not love him

That’s what I live about this country. Anywhere else they’d have told that train to wait. Not here

Bit of ‘Dad running’ especially from the chap at the front 😂😂

It shows he is mindful that he is running late. He’s not up his own backside, strolling along with an attitude like “I’m important the train will wait for me”

This video dates a day prior to the private wedding ceremony between Boris Johnson and his fiancée Carrie Symonds who tied the knot in London on Saturday. The couple is said to have wed at the Roman Catholic Westminster Cathedral with even the senior staff of his office unaware of the wedding plan. Boris (55) had announced his engagement to his wife Carrie Symonds  (33) in February 2020. Last year, Symonds had announced the arrival of their child on Instagram. “Many of you already know but for my friends that still don’t, we got engaged at the end of last year… and we’ve got a baby hatching early summer. Feel incredibly blessed,” she said. The two have a one-year-old son together.

This is the UK PM’s third marriage. In September 2018, Johnson announced that he would be divorcing his second wife Marina Wheeler. The two share four children. Before Wheeler, Johnson was married to  Allegra Mostyn-Owen.