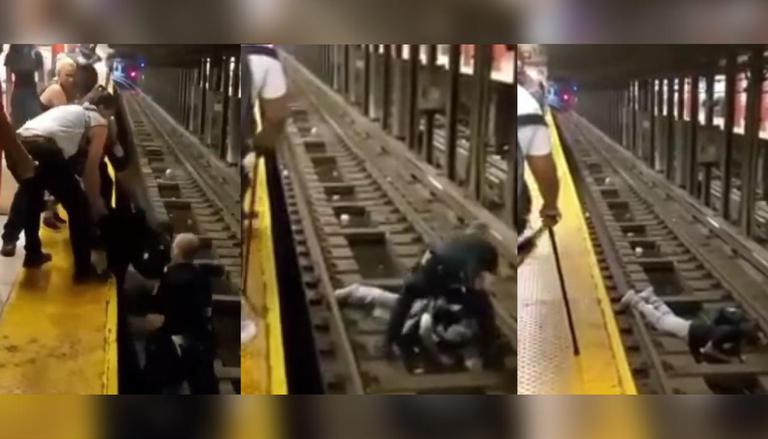 In an act of extraordinary courage, the life of a passenger was saved by a New York police officer on the subway tracks in Bronx, US. A video of a dangerous rescue is surfacing on social media, where an officer and a commuter are seen jumping onto the track to evacuate a man who had fallen onto the rail track minutes before the train arrived. The video clip was shared on the official page of the New York City Police Department (NYPD), where a shining example of sheer bravery is displayed.

In the viral video, it is seen that a man had fallen face-down on the subway track. Meanwhile, the US cop who was present at the sight risked his own life and jumped onto the track, seeing this a bystander immediately joined the operation. The courageous act was captured on camera, where the duo is seen pulling the man, while passengers around applauded them with loud clapping.

Sharing the video, the NYPD wrote, “NYPD cops help New Yorkers at any cost!”. The post further read that a sick strap hanger lost consciousness and fell on the subway tracks in the Bronx. The officer, named Ludin Lopez, didn’t hesitate for a moment to put his safety ahead of his own. The post further read, “We’re also grateful to the Good Samaritan who courageously helped”.

According to media reports, the incident happened around noon, when the victim, who was identified as Jessy Branch, was waiting on the southbound 2/5 platform. He suddenly turned unconscious and lost his balance, and fell onto the 149th street station subway track. Lopez, who saved Branch, said to the media person that the train was just a minute away when he spotted Branch lying in the middle of the subway track.

Netizens’ reaction on US cop’s bravery

The video is now extensively surfacing on social media platforms. Netizens are pouring in love and appreciation for the courageous display shown by the commuter and the officer. One user who saw the video expressed his feelings and said, “My stomach was in a knot… look how close that incoming train was! God bless those heroes”. A second person said, “Officers and civilians are heroes!” A third person thanked the police officer and said, “Thank you to the NYPD for helping this person. God bless.” Some dropped red hearts while others dropped a smiling emoticon in the comment box. Another Instagrammer wrote, “That’s for Real. The NYPD is the finest. Great JOB”. A fifth user said, “Great group effort.”