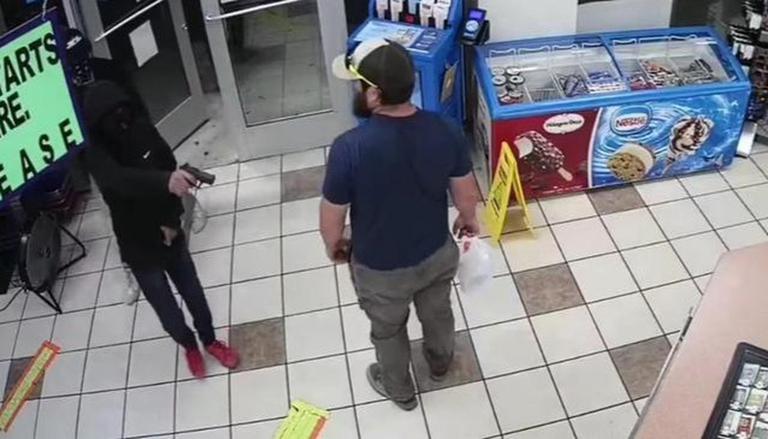 In a sheer act of bravery, a US Marine Corps veteran put a stop to an armed robbery at an Arizona gas station store. The clip of the incident is extensively circulating on social media platforms, and the Marine Corps veteran is earning appreciation for his courageous job. Shared on the Facebook page by the Yuma County Sheriff’s office, the 8-second clip shows two masked men entering the store. While one at the front pointed a handgun at the store’s cashier, within a moment the Marine veteran is seen disarming the robbers.

In the last part of the video, one of the miscreants is seen swiftly scurrying away, and the other gets nabbed by the brave marine veteran who had been to the store to purchase some household items. Since the video went online, it has garnered millions of views, along with a flood of appreciative comments.

According to the press release issued by YSCO, the incident took place at about 4:30 am at a Chevron gas station, located at 10747 E North Frontage Road in Yuma. “Upon arrival, deputies learned of three suspects entering the Chevron, one of them armed with a handgun. The other two suspects fled the area when they witnessed their fellow criminals stopped. The customer was able to detain the suspect he disarmed until law enforcement arrived,” it read.

“The suspect detained during the incident was a juvenile and was booked into the Yuma County Juvenile Justice Center for one count of armed robbery and one count of aggravated assault,” read the statement.

The law enforcement agency also reported that “no injuries were reported by any of the victims”. The other two suspects are currently outstanding. Impressed by the courageous act of the customer, when the police department contacted the person asking how he was able to control the situation, he replied, “The Marine Corps taught me not to [mess] around.”