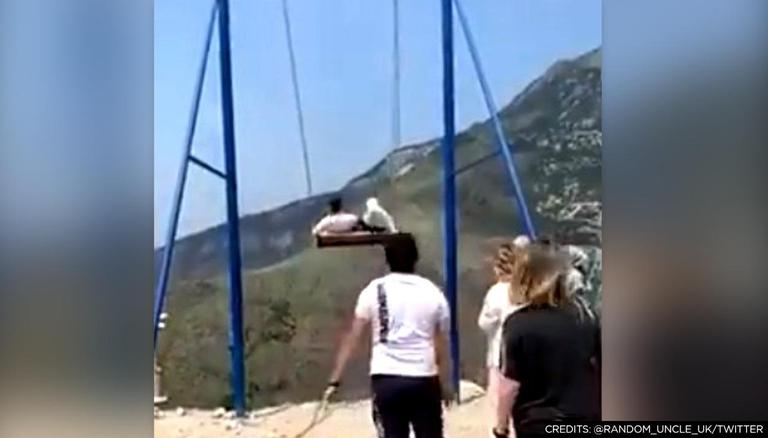 In a horrifying incident, two women sitting on a swing set overhanging Sulak Canyon in Dagestan, Russian accidentally plunged off the top of a 6,300-Ft cliff and miraculously survived the mishap with no grave injuries. Meanwhile, the local police officials have filed a complaint and directed an investigation too.

In the video, the girls’ pair can be seen taking a ride on the swing, when suddenly as they head towards the edge of the cliff, the seat suddenly topples over after the chains are snapped causing the swing to tip over at the moment ejected them over the steep cliffs.

The fear-infusing footage of the video was widely circulated on social media wherein, the onlookers can be heard screaming in astonishment as the chain snapped and the duo toss over. The video can be viewed at,

Moment two women fell off a 6000-Ft cliff swing over the Sulak Canyon in Dagestan, Russia.
Both women landed on a narrow decking platform under the edge of the cliff & miraculously survived with minor scratches.
Police have launched an investigation. pic.twitter.com/oIO9Cfk0Bx

Fortunately, they landed on a small wooden platform right below the swing-boarding spot and did not suffer serious injuries. Instead of plunging into a life-taking episode, the pair sustained only bruises and scratched as shocked onlookers hauled them back onto the safe spot.

After the heart-stopping incident of the duo, local police have launched an investigation into whether safety checks are complied with at similar swing spaces built near Zubutli village around the Canyon i.e. more than one mile deep. In fact, the Sulak gorge is deeper than the Grand Canyon in the United States. This is referred to as one of the deepest canyons in Europe.

A local newspaper reported, “The girls got scared and sustained scratches but neither of them suffered injuries.”

Meanwhile, the local Kazbekovsky council are even expected to demand such precipice swings be withdrawn, as per reports. The Ministry of Tourism is Dagestan said that the swing “did not meet safety standards” and as a result, the young women descended. Law enforcement agencies and other services have already started to conduct relevant checks to ensure that no more threat to life prevails.